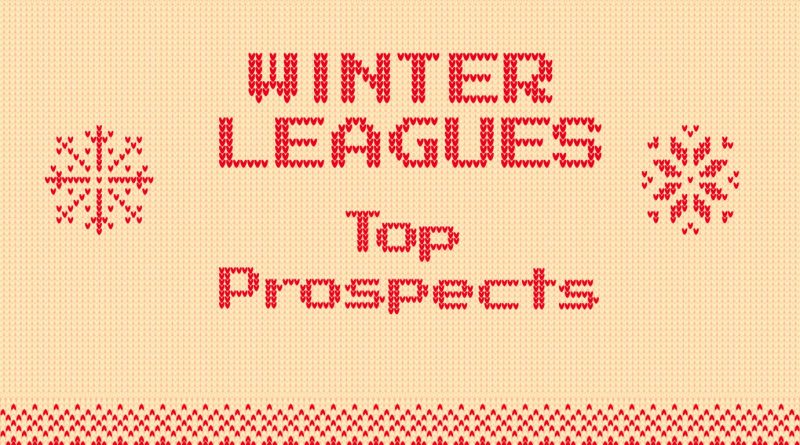 The 2020 baseball season just keeps rolling along. When we first checked in on top prospects playing internationally, games were only taking place in Mexico and the Dominican Republic. The Venezuelan winter league has since begun and play is set to begin in Puerto Rico next week. With that in

The 2020 baseball season just keeps rolling along. When we first checked in on top prospects playing internationally, games were only taking place in Mexico and the Dominican Republic.

The Venezuelan winter league has since begun and play is set to begin in Puerto Rico next week. With that in mind, we thought it’d be a good opportunity to see how some of baseball’s best prospects are performing in winter leagues:

Cristian Pache (Braves No. 1, MLB No. 10)
Pache didn’t waste any time making his presence felt in the Estrellas Orientales (D.R.) lineup. The 22-year-old outfielder had two hits in his debut — an RBI double and an infield single — as he looks to get in some more reps after making his Major League debut late in the 2020 season. Pache has appeared in two games since that debut and is batting .222 (2-for-9) in winter ball.

Vidal Bruján (Rays No. 3, MLB No. 41)
Bruján is tied for second in LIDOM (D.R.) with four stolen bases, but his plus speed (a 70 on the 20-to-80 scouting scale) isn’t the only tool Bruján has put on display for Toros del Este. The 22-year-old infielder has been doing a bit of everything offensively, hitting .333 through nine games. Bruján, who is known more for his speed than his power, has seen just one of his hits go for extra bases (a double), but he’s had no trouble reaching base as he’s drawn seven walks and has an on-base percentage of .471. While he has been caught stealing three times, it should come as no surprise that Bruján has been aggressive on the basepaths. After all, he stole 55 bases in 2018 and 48 in ’19.

Deivi García (Yankees No. 3, MLB No. 87)
García has made just one start, so the sample size is small but the results were solid. Pitching in the Dominican Republic for Tigres del Licey, García threw 1 2/3 scoreless innings and struck out one. The right-hander issued a pair of walks, but has yet to yield a hit.

Vladimir Gutiérrez (Reds No. 16)
It’s hard to be more dominant than Gutiérrez was in his lone start for Tigres del Licey (D.R.). The 25-year-old, whom the Reds signed out of Cuba in 2016, fired four scoreless innings and racked up seven strikeouts in his first winter league action. Gutiérrez spent the 2019 season with Triple-A Louisville, where he posted a 6.04 ERA and struck out 117 over 137 innings.

Isaac Paredes (Tigers No. 6)
Simply put, Paredes has been raking for Vanados de Mazatlán (Mexico). Batting .339 (20-for-59), Paredes has driven in 13 runs and drawn 11 walks (compared to six strikeouts). The 21-year-old has also flashed a bit of speed as he’s swiped three bases without getting caught. Paredes, whom the Tigers acquired in a 2017 trade with the Cubs, made his Major League debut in August and hit .220 over 34 games.

Gabriel Moreno (Blue Jays No. 8)
Moreno is off to a fast start in Venezuela for Cardenales de Lara. The 20-year-old catcher is hitting .333 (5-for-15) and two of his five hits have gone for extra bases (both doubles). Moreno has also driven in four runs, walked three times and struck out twice. Moreno isn’t the only Blue Jays prospect who has fared well internationally as Otto Lopez (Blue Jays No. 13) has had success playing for Leones del Escogido (D.R.). Lopez, a 22-year-old middle infielder, has hit .270 (10-for-37) over 11 games and driven in a trio of runs. Lopez, who has the ability to play all over the diamond, has a strong ability to make contact and hit over .300 in both 2018 and ’19.

Yermín Mercedes (White Sox No. 22)
Mercedes has played in four games and is batting .357 (5-for-14) with four RBIs, but his most notable hit was clearly Tuesday’s walk-off blast. Mercedes lifted Tigres del Licey (D.R.) to victory with a two-run homer earlier this week and has an OPS of .971 in a small sample size this winter. Mercedes, 27, made his Major League debut in August, but only received one at-bat. In 2019, he hit .317 with 23 homers in 95 games split between Double- and Triple-A.

Extra innings? No pressure. No. 22 #WhiteSox prospect Yermin Mercedes cranks a go-ahead homer in the 10th for the Tigres del Licey. pic.twitter.com/ai4ae1qXLB

Jeremy Peña (Astros No. 4)
After hitting .183 in winter ball last season, Peña is performing much better for Estrellas Orientales (D.R.) this time around and is hitting .333 (12-for-36) through 10 games. The 2018 third-round pick has proven to be aggressive at the plate while in the D.R. as he’s struck out seven times and walked just once. The 10-game sample size is small, but those numbers track with his career marks as he’s drawn 65 walks and struck out 109 times in 145 career games.

Angel Rondón (Cardinals No. 13)
While Rondón has given up some hits, runs have been tough to by against the 23-year-old. Pitching in the Dominican Republic for Águilas Cibaeñas, has tallied eight innings over three games (two starts) and given up just a pair of unearned runs. Rondón, who has struck out six, has seemingly spent a lot of time working his way out of trouble as he’s walked two and surrendered eight hits.

Luis Oviedo (Indians No. 25)
Pitching for Cardenales de Lara in the Venezuelan winter league, Oviedo has appeared in two games and held opponents scoreless out of the bullpen. The 21-year-old, who spent 2019 with Class A Lake County, has thrown 2 2/3 innings, given up one hit and struck out three.