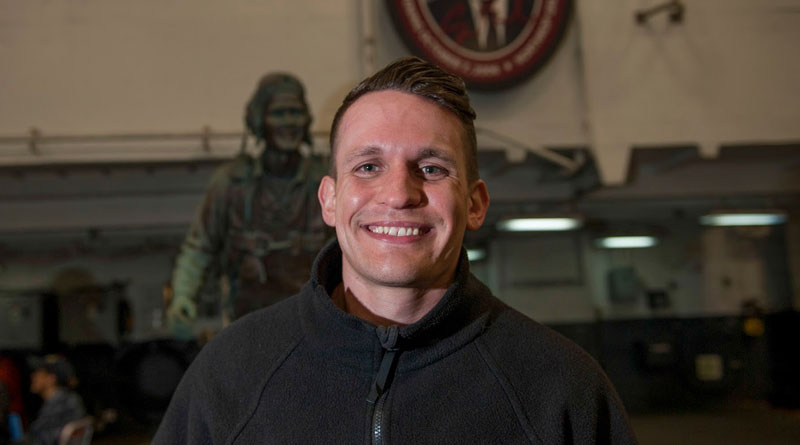 As aboatswain’s mate,Shermanis responsiblefor the underway replenishment, anchoring, boat launch and recovery tasks.My favorite part of this command is my department, said Sherman. “I love my people, and the chain of command. My fellow first classes are all very tight.”

Named in honor of former President George H. W. Bush, the carrier is longer than three football fields, measuring nearly 1,100 feet.The ship, a true floating city, weighs more than 100,000 tons and has a flight deck that is 252 feet wide.Two nuclear reactors can push the ship through the water at more than 35 mph. Powerful catapults slingshot the aircraft off the bow of the ship. The planes land aboard the carrier by snagging a steel cable with an arresting hook that protrudes from the rear of the aircraft.

As a sailor with numerous responsibilities,Shermanlearns about life at sea serving in the Navy and the importance of taking personal responsibility while leading others while still using lessons learned from their hometown.

My parents taught me be the best no matter what you get assigned to,saidSherman.Nothing is ever owed to you. You will earn it.

Sailors jobs are highly varied aboard the carrier. Approximately 3,200 men and women make up the ship’s crew, which keeps all parts of the aircraft carrier running smoothly — this includes everything from washing dishes and preparing meals to handling weaponry and maintaining the nuclear reactors. Another 2,500 men and women form the air wing responsible for flying and maintaining more than 70 aircraft aboard the ship.

George H.W. Bush, like each of the Navys aircraft carriers, is designed for a 50-year service life. When the air wing is embarked, the ship carries more than 70 attack jets, helicopters and other aircraft, all of which take off from and land aboard the carrier at sea.

All of this makes the George H.W. Bush a self-contained mobile airport and strike platform, and often the first response to a global crisis because of a carriers ability to operate freely in international waters anywhere on the worlds oceans.

I am most proud of the inserv inspection and materials inspection that the ship has been working on for years, said Sherman.

As a member of one of the U.S. Navys most relied upon assets,Shermanand other George H.W. Bush sailors know they are part of a legacy that will last beyond their lifetimes providing the Navy the nation needs.”The Navy has taught me discipline, responsibility, and how to be successful,” addedSherman.