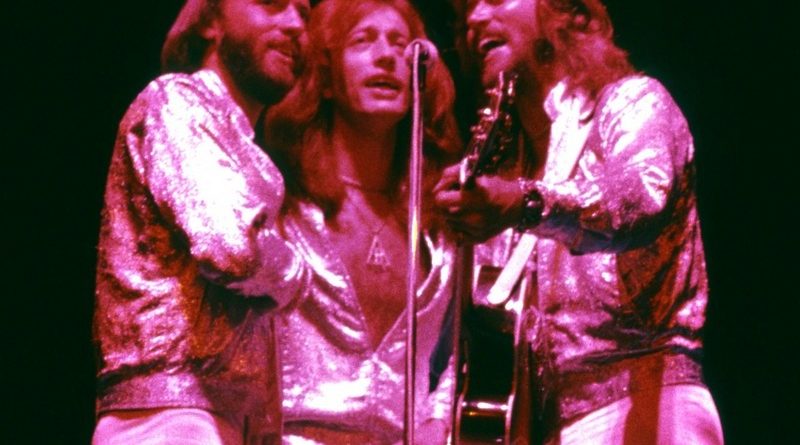 It was 43 years ago today (February 4th) in 1978 that the Bee Gees‘ “Stayin’ Alive” began its four-week run at the Number One spot. The song — along with the group’s other 1978 Number Ones “How Deep Is Your Love,” and “Night Fever” — was part of the blockbuster soundtrack to the John Travolta movie Saturday Night Fever, which had opened the previous December. Shortly after Fever‘s runaway success, Barry Gibb spoke about the music to Rolling Stone explaining, “I didn’t know anybody was going to call it disco, but they did. . . We thought it was R&B. We like the Stylistics and the Delfonics and people who sang in falsetto.”

He went on to say that the physical and spiritual vibe of New York City is what drove the song both as a record and as a statement: “‘Stayin’ Alive’ was born of those feelings and the lyric of ‘The New York Times’ effect on man.’ New York, in fact, was having that effect on the whole world at that point. Not so much California, but Studio 54, and the nightlife, and the young people trying to find a future for themselves where without this nightlife, there might not be a future. I think (Travolta’s character) ‘Tony’ depicted that.”

The soundtrack album to Saturday Night Fever, featuring music by the Bee Gees, Yvonne Elliman, KC & The Sunshine Band, Tavares, MFSB, and the Trammps, went on to become the biggest-selling soundtrack of all time, selling over 16 million U.S. copies to date.

The album scored four Number One hits: “How Deep Is Your Love,” “Stayin’ Alive,” and “Night Fever,” by the Bee Gees, and Yvonne Elliman’s “If I Can’t Have You.” All four hits were written by the Bee Gees — Barry, Maurice, and Robin Gibb.

Shortly before his death in 2003, Bee Gees co-founder Maurice Gibb told us that the group has always been more focused on new projects rather than past glories: [“We’ve always moved on, not like the cult of the day who want to go back to the ’70s; we’re still moving forward. We’ve done that, been there. And it’s very hard. . . I always get quite surprised when people ask us sometimes, they’d say things like, ‘Oh, can you write another ‘Stayin’ Alive?’ Or could you write another ‘You Should Be Dancing?” It’s, like, we can’t as writers; we can’t go back.”] SOUNDCUE (:10 OC: . . . can’t go back)

Following the success of Saturday Night Fever the Bee Gees’ had three Number One hits from their 1979 album, Spirits Having Flown. When we spoke to the late-Robin Gibb some time ago, he explained that there’s a big difference between being a hit pop act and a cultural game changer: [“That particular piece of music, it was the biggest selling soundtrack of all time. It still is. And there is nothing . . . it’s equated to walking on the moon, nothing really touched the sales of it. The thing about it is, there was no hype, because in those days you couldn’t really hype anything. It was purely organic unlike today of course, where everything is hype.”] SOUNDCUE (:17 OC: . . . everything is hype)

Beginning in 1979 when the Gibbs embarked on their massive Spirits Having Flown tour, “Stayin’ Alive” has been a highlight of every Bee Gees concert and has come to symbolize the late ’70s disco movement.

O’Jays frontman Eddie Levert is a huge Bee Gees fans and loved what they did musically during their 1970s comeback: [“I think the Bee Gees are the greatest thing that goes about, ’cause these guys have been able to keep reinventing themselves. We’ve almost come that distance with them, but they still have proven that they’ve been able to live in every century. Well, most of the artists nowadays, man, they rely on these samples. They need to start creating the licks again.”] SOUNDCUE (:22 OC: . . . the licks again)

The RSO Number One run was broken during the three weeks when Paul McCartney & Wings‘ “With A Little Luck,” and Johnny Mathis and Deniece Williams‘ “Too Much, Too Little, Too Late,” briefly topped the charts.

RSO bounced back with Olivia Newton-John and John Travolta‘s Number One hit “You’re The One That I Want” from Grease which topped the charts for one week, followed by Andy Gibb’s biggest hit “Shadow Dancing” — which was the only song co-written by all four Gibb brothers — and topped the charts for seven weeks.

Following another three week break when the Rolling Stones‘ ‘Miss You” and the Commodores‘ “Three Times A Lady” topped the charts, RSO Records was back at Number One with Frankie Valli‘s Barry Gibb-written theme song to Grease.

Amazingly, during those eight months, songs co-written and produced by Barry Gibb held down the Number One spot for 20 weeks — an unprecedented feat in pop music.

Now streaming and showing on HBO is the long awaited documentary, The Bee Gees: How Can You Mend A Broken Heart.

The doc features newly filmed Barry Gibb interviews along with decades worth of footage of the band along with archival interviews with the late- Robin and Maurice Gibb.